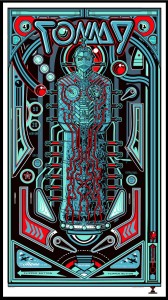 Title: Tommy (Tommy by The Who)
Country: UK
Year: 1975
Director: Ken Russell
Cast: The Who, Oliver Reed, Ann-Margret, Jack Nicholson, Eric Clapton, Elton John, Roger Daltrey
Duration: 111 min.
Language: English
Plot: After witnessing the murder of his father by his mother’s lover, a young boy becomes catatonic, deaf and blind. In his teens he discovers an intuitive ability to play pinball and becomes a master at it, which triggers the birth of a huge following cult. The Who’s movie based on Pete Townshend’s  rock opera.