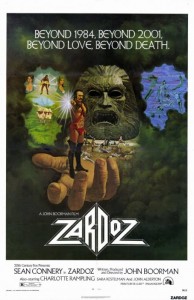 Title: Zardoz
Country: UK
Year: 1974
Director: John Boorman
Cast: Sean Connery, Charlotte Rampling, Sara Kestelman, Niall Buggy
Duration: 105 min.
Language: English | Swedish | Latin | German | French | Irish Gaelic
Plot: In a dystopian future the Earth is divided into two camps, the wild barbaric group and the overly civilized with psychic abilities. A plague is attacking the advanced ones, after which they cease to have any interest for existence and become nearly catatonic. When Zed, one of the barbarians, crosses over, the tenuous balance in their world is threatened.

This entry was posted in Z. Bookmark the permalink.