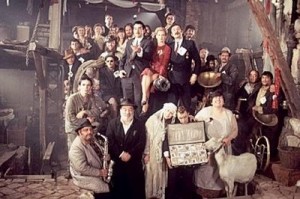 Title: Underground
Country: Yugoslavia | France | Germany
Year: 1995
Directed by: Emir Kusturica
Cast: Miki Manojlovic, Lazar Ristovski, Mirjana Jokovic
Duration: 170 min.
Language: Serbian | German | French | English
Plot: Belgrade during World War II. A black marketeer who smuggles the weapons to partisans doesn’t mention to the workers that the war is over, and they keep producing. Years later they break out of their underground shelter, only to convince themselves that the war is still going on.

This entry was posted in U. Bookmark the permalink.