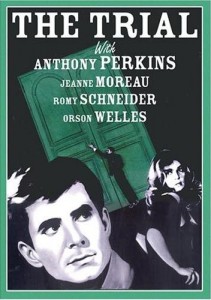 Title: The trial (Le procés)
Country: France | Germany | Italy
Year: 1962
Directed by: Orson Welles
Cast: Anthony Perkins, Jeanne Moreau, Romy Schneider
Duration: 118 min.
Language: English
Plot: Josef K wakes up in the morning and finds the police in his room. They tell him that he is on trial but nobody tells him what he is accused of. In order to find out about the reason of this accusation and to protest his innocence, he tries to look behind the facade of the judicial system.