The Man from London 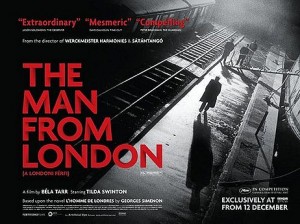 Title: The Man from London (A Londoni férfi)
Country: France | Germany | Hungary
Year: 2007
Director: Béla Tarr
Cast: Miroslav Krobot, Tilda Swinton, Ági Szirtes
Duration: 139 min.
Language: French | English
Plot: Maloin, a railway worker, recovers a briefcase containing a significant amount of money from the scene of a murder to which he is the only witness. Wracked by guilt and fear of being discovered he sinks into despondence and frustration which leads to acrimony in his household. Meanwhile a police detective investigates the disappearance of the money and the unscrupulous characters connected to the crime.