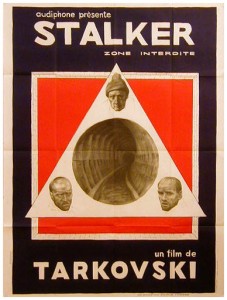 Country: USSR | Germany
Year: 1979
Directed by: Andrei Tarkovski
Cast: Aleksandr Kaidanovsky, Alisa Frejndlikh, Anatoli Solonitsyn
Duration: 164 min.
Language: Russian
Plot: Near a gray and unnamed city is the Zone, an alien place guarded by barbed wire and soldiers. Over his wife’s numerous objections, a man rises in the dead of night: he’s a stalker, one of a handful who have the mental gifts (and who risk imprisonment) to lead people into the Zone to the Room, a place where one’s secret hopes come true.