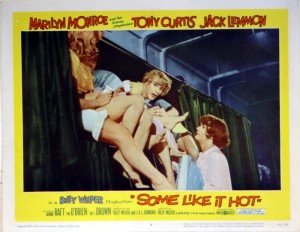 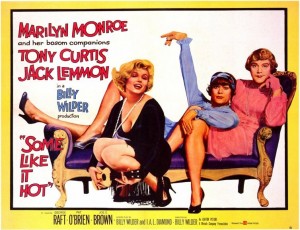 Title: Some Like It Hot
Countr y: USA
Year: 1959
Director: Billy Wilder
Cast: Marilyn Monroe, Tony Curtis, Jack Lemmon, Joe E. Brown, George Raft
Duration: 120 min.
Language: English
Plot: Two struggling musicians witness the St. Valentine’s Day Massacre and try to find a way out of the city before they are found and killed by the mob. The only job that will pay their way is an all girl band so the two dress up as women. In addition to hiding, one falls for another band member but can’t tell her his gender, and the other has a rich suitor who will not take “No” for an answer.