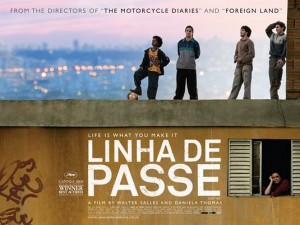 Title: Linha de Passe
Country: Brazil
Year: 2008
Director: Walter Salles, Daniela Thomas
Cast: Sandra Corveloni, João Baldasserini, Vinícius de Oliveira
Duration: 108 min.
Language: Portuguese
Plot: In the periphery of São Paulo, the pregnant single mother Cleuza works as maid in the apartment of a middle-class family. Each of her sons has a different unknown father: the oldest, Dênis, has a baby son that lives with his mother and he works as motorcycle courier; Dinho is a converted Christian and works as attendant in a gas station; Dario is an aspirant soccer player that is getting older without the expected chance in a team; and the youngest, Reginaldo, is obsessed about finding his father who works as a bus driver, and spends most of his spare time traveling by bus.