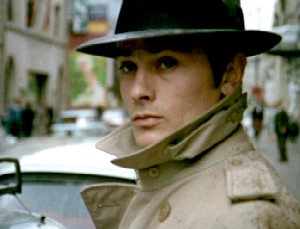 Title: The Godson; The Samurai (Le Samouraï)
Country: France | Italy
Year: 1967
Directed by: Jean-Pierre Melville
Cast: Alain Delon, Nathalie Delon, François Périer
Duration: 105 min.
Language: French
Plot: Hitman Jef Costello is a perfectionist who always carefully plans his murders and who never gets caught. One night however, after killing a night-club owner, he’s seen by witnesses. His efforts to provide himself with an alibi fail and more and more he gets driven into a corner.

This entry was posted in L, S. Bookmark the permalink.