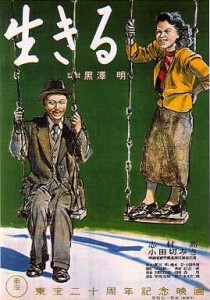 Title: To Live (Ikiru)
Country: Japan
Year: 1952
Director: Akira Kurosawa
Cast: Takashi Shimura, Nobuo Kaneko, Shin’ichi Himori
Duration: 143 min.
Language: Japanese
Plot: Kanji Watanabe is a longtime bureaucrat in a city office who, along with the rest of the office, spends his entire working life doing nothing. He learns he is dying of cancer and wants to find some meaning in his life. Unable to talk with his family, he spends a night on the town with a novelist, but that leaves him unfulfilled.

This entry was posted in I. Bookmark the permalink.