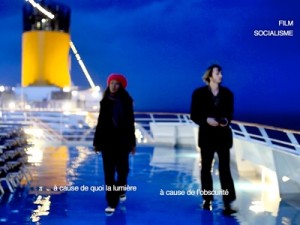 Review: Film Socialisme, like most of his other essay films, is all over the place and (purposely) impossible to follow, but the master is adept at making you feel that if you don’t understand it, it’s your fault, not his. In any case it’s true that he tosses out more ideas in five minutes than most directors manage to come up with in two hours or in whole careers. more

This entry was posted in F, S. Bookmark the permalink.