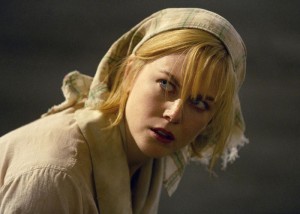 Title: Dogville
Country: Denmark | other 9 countries
Year: 2003
Director: Lars von Trier
Cast: Nicole Kidman, Harriet Andersson, Lauren Bacall, Paul Bettany
Duration: 178 min.
Language: English
Plot: A woman on the run from the mob is reluctantly accepted in a small Colorado town. In exchange, she agrees to work for them. As a search visits town, she finds out that their support has a price. Yet her dangerous secret is never far away…

Lars von Trier likes to risk and everything that smells like experimentation or vanguard, and Dogville is a good evidence of it. The film is about the History and birth of the United States of America, but it isn’t shot there. The scenario is a theatrical stage, without nothing more than actors, actresses, and some little elements. That’s it; von Trier uses only the essential for his film, a story of a rich and idealist girl (Nicole Kidman) who flees her previous life searching for the meaning of it in a nascent hostile country where it isn’t easy to live. Hard and controversial, the film exploits the force of its script and the coldness of its decoration, empty and inanimate, in a disturbing escalation of implicit violence which invades, little by little, all the film.

[It's the first part of the Lars von Trier's American trilogy, composed by Dogville, Manderlay and Washington.] (Watuzee)

This entry was posted in D. Bookmark the permalink.