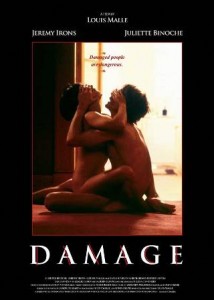 Title: Damage
Country: UK | France
Year: 1992
Director: Louis Malle
Cast: Jeremy Irons, Juliette Binoche, Miranda Richardson, Rupert Graves
Duration: 111 min.
Language: English | French | German | Italian
Plot: A member of Parliament falls passionately in love with his son’s fiancée. They pursue their affair with obsessive abandon despite the dangers of discovery and what it would do to his complacent life and his son. He wants to give up his current lifestyle to be with her. She has no intention of allowing him to do this, preferring to have her marriage to the son as a cover.

This entry was posted in D. Bookmark the permalink.