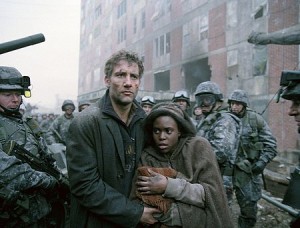 Title: Children of men
Country : USA | UK
Year: 2006
Directed by: Alfonso Cuarón
Cast: Clive Owen, Julianne Moore, Michael Caine
Duration: 109 min.
Language: English | Spanish | German | Italian | Romanian | Arabic
Plot: The world’s youngest citizen has just died at 18, and humankind is facing the likelihood of its own extinction. Set in and around a dystopian London fractious with violence and warring nationalistic sects, Children of Men follows the unexpected discovery of a lone pregnant woman and the desperate journey to deliver her to safety and restore faith for a future beyond those presently on Earth.

Alfonso Cuarón with Alejandro Gonzalez Iñárritu, Rodrigo García, and Guillermo del Toro, are one of the most important filmmakers of the new generation of Mexican directors, and he showed it with this unquestionable science-fiction masterpiece. After filming the remarkable And Your Mother Too and one of the darkest Harry Potter films, The Prisoner of Azkaban, Cuarón adapted this P. D. James novel, joining the text with a fantastic cast, an impeccable photography and a carefully selected soundtrack. With all this, Cuarón was consecrated with this film as a capital film director. (Watuzee)