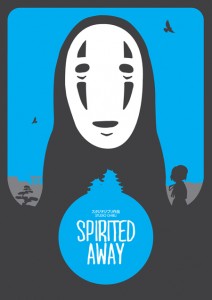 Title: Chihiro’s Journey; Spirited Away (Sen to Chihiro no kamikakushi)
Country: Japan
Year: 2001
Director : Hayao Miyazaki
Cast: -
Duration: 125 min.
Language: Japanese
Plot: In the middle of her family’s move to the suburbs, a sullen 10-year-old girl wanders into a world ruled by gods, witches, and monsters; where humans are changed into animals; and a bathhouse for these creatures.

The imaginary of Hayao Miyazaki seems to have no limits in this deployment of fantasy, which is Chihiro’s Journey. Its trace and color, unquestionably ‘made in’ Studio Ghibli, fits perfectly with a story which can be enjoyed indistinctly by kids and adults.

The creation of new and absolutely original places is a subject which Miyazaki knows very well; he demonstrates it in his previous films like Princess Mononoke or My Neighbor Totoro, ending it in his last one, which won the Oscar for the best animation film. Indeed, Chihiro’s Journey is, nowadays, a classic of the animation cinema. (Watuzee)