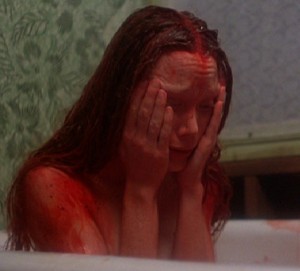 The horror genre had a reason to celebrate when Brian de Palma filmed this version of a Stephen King’s novel. Carrie can be read like a metaphor, like a teen allegory; the fear of being rejected, of the body changes, and how these teenage fears can become in a violent response.

Its protagonist, Carietta “Carrie” N. White, a sixteen years old girl, has a fundamentalist religious mother who’s obsessed with her pureness, taking her daughter to a madness spiral that manifests in Carrie’s paranormal skills. With all, The accumulated pressure she’s bearing has an unexpected consequence which de Palma leads in a memorable sequence of horror scenes which doesn’t stop until the end of the film, keeping the audience in a constant tension. (Watuzee)