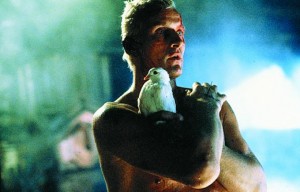 Title: Blade Runner
Country: USA | Hong Kong
Year: 1982
Director: Ridley Scott
Cast: Harrison Ford, Rutger Hauer, Sean Young, Edward James Olmos, Daryl Hannah
Duration: 125 min.
Language: English | Hungarian | Cantonese | Japanese
Plot: In a nearby future, man has been able to create artificial beings called replicants. They are so perfect that nobody can distinguish them from real humans. The Blade Runners, a brigade specially trained to identify replicants, have the mission to keep them under the law.

With this film, Ridley Scott closed an amazing duo of science-fiction films, which began three years before with Alien. Blade Runner is still today one of the biggest sci-fi productions ever because of its atmosphere, dark and sinister, mixed with the narrative talent of Phillip K. Dick and the genius of Harrison Ford. The result is a futurist gothic tale that will remain as one of the most emphatic works in its genre, by the hand of an inspired Ridley Scott, who had the capacity of unifying it all in a masterpiece without fissures. (Watuzee)

This entry was posted in B. Bookmark the permalink.