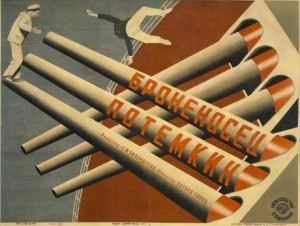 Title: Battleship Potemkin (Bronenosets Potyomkin)
Country: Soviet Union
Year: 1925
Director: Sergei M. Eisenstein
Cast: Aleksandr Antonov, Vladimir Barsky, Grigori Aleksandrov
Duration: 75 min.
Language: -
Plot: Based on the historical events of a riot at the battleship Potemkin. What started as a protest strike when the crew was given rotten meat for dinner ended in a revolt. The sailors raised the red flag and tried to ignite the revolution in their home port Odessa, resulting on a street demonstration which brought on a civilian massacre.

What to say about Battleship Potemkin? This magnificent work, by Sergei M. Eisenstein, is one of the most influential films ever, the beginning of the modern cinematographic editing and montage because of its cameras and narrative style, that knows how to transmit well-being or anguish sensations with its technique, especially in the famous stairs scene, eternal reference in the film-making works. Battleship Potemkin describes the first Russian revolution against the Tsar, and his cruel answer to the insurrection. This soviet film, recorded in 1925 is, definitely, one of the pillars of the history of cinema, because of its merit and significance in the technical and artistic aspects, that marked a before and after in the film recording and editing. (Watuzee)

This entry was posted in B. Bookmark the permalink.