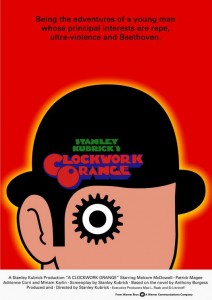 Title: A clockwork orange
Country: UK | USA
Year: 1971
Director: Stanley Kubrick
Cast: Malcolm McDowell, Patrick Magee, Warren Clarke
Duration: 136 min.
Language: English
Plot: Being the adventures of a young man… who couldn’t resist pretty girls… or a bit of the old ultra-violence… went to jail, was re-conditioned… and came out a different young man… or was he?

One of the most famous masterpieces of the well known film director Stanley Kubrick.

A Clockwork Orange, based on an Anthony Burguess novel, is an essay about the violence in a science-fiction context, where the ethical borders are pierced by everybody, including the authorities. The Stanley Kubrick’s unquestionable talent, the excellent performances of the actors, specially the protagonist, by Malcolm McDowell, and the music by Beethoven, made this history became one of the most amazing future visions of the history of cinema. Essential. (Watuzee)

This entry was posted in A. Bookmark the permalink.